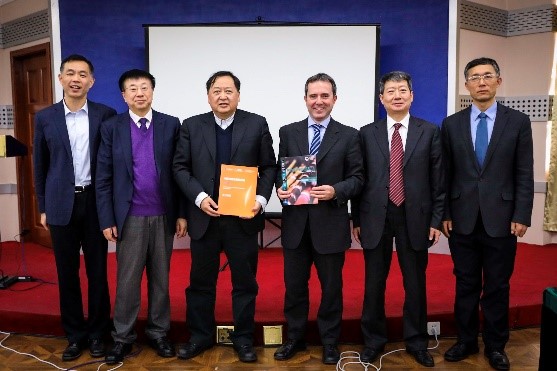 On 25 November 2018, the China National Renewable Energy Centre (CNREC) and the International Energy
Agency (IEA) jointly hosted an event for publishing CNREC’s China Renewable Energy Outlook (CREO) 2018
and the IEA’s Renewables 2018 in Beijing. Wang Zhongying, Director of CNREC, presented the main results
of CREO 2018: “Many developed countries including Denmark have decoupled economic growth from
growth in energy consumption. An idealized three‐way relationship between energy, economy, and
environment should include green energy and high quality economic growth enabling the realization of
ecological civilization,” he said.

CREO 2018 analyzes two energy scenarios for China through 2050: a Stated Policies scenario based on
existing policies and how they might be continued through 2050, and a Below 2 °C scenario, which
examines how China might meet its energy and economic targets while remaining under a carbon
constraint with a Below 2 °C future. China’s current policies and strategies include scaling up renewable
deployment, establishing carbon trading, and introducing competitive electricity markets. One of the
priority tasks for renewable integration is adjusting electric power dispatch, particularly to enable interprovincial
and inter‐regional power dispatch. CREO 2018 shows that with improved dispatch and enhanced
deployment of wind and solar, these power sources can become the core of both the electricity and energy
systems by 2040, enabling a Below °C energy future. The analysis also shows that such a system results in
lower costs for end‐users, higher employment, as well as lower emissions of conventional pollutants, than
the Stated Policies scenario.

According to the IEA’s forecasts in Renewables 2018, wind and solar PV will become the cheapest energy
sources in the future. Implementation of market reform is necessary for wind and solar PV to substitute for
fossil fuels on a large scale, but these reforms ultimately result in cost savings for consumers and taxpayers.
The report also highlights the role of modern bio‐energy, which the IEA projects will account for 30% of
newly added global renewable energy by 2023.