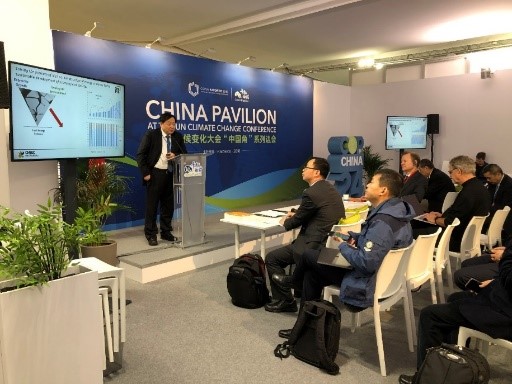 On 15 December 2018, the China National Renewable Energy Centre (CNREC) launched the “China Renewable Energy Outlook 2018” at the China pavilion of COP24 in Katowice, Poland. The director of CNREC, Mr. Wang Zhongying, spoke about the background of the report, the mid-to-long term development scenarios and pathways, as well as key conclusions.

By comparing the results of the Stated Policies scenario and the Below 2°C scenario, the analysis identifies the gap between the current policy environment and additional steps needed to achieve the Paris Agreement targets. The report suggests pathways for China’s 2050 energy transition and renewable energy development, including a sharp reduction of coal and oil consumption in the primary energy consumption mix, and large-scale development of wind and solar power.

The report also estimates how the two major scenarios compare on key indicators such as GDP, GDP per capita, employment, and emissions of carbon dioxide and other air pollutants—showing that in general the Below 2° C scenario features improved economic growth and employment, in addition to lower emissions, versus the Stated Policy scenario. Because of the scale of wind and solar capacity growth needed before 2030 to achieve the Below 2° C scenario, Mr. Wang emphasized that the 14th Five-Year Plan should continue the trend of expanding of the annual installation of solar and wind energy.