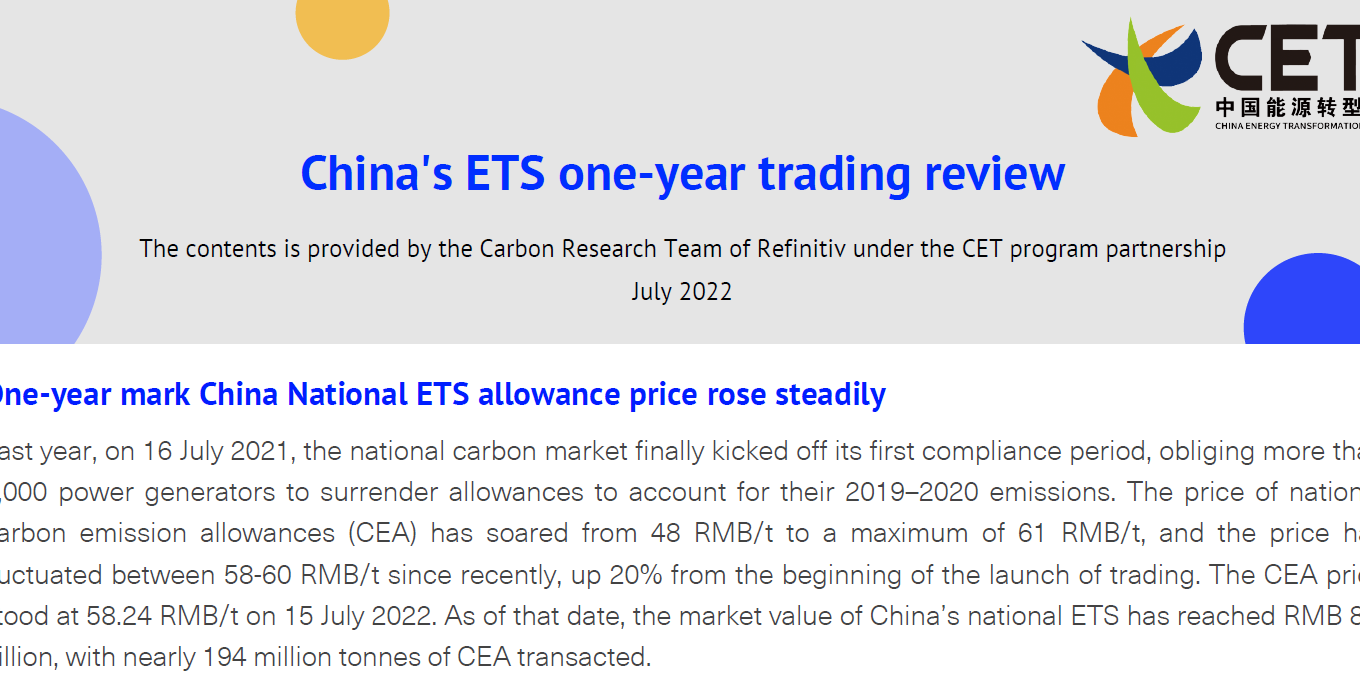 Last year, on 16 July 2021, the national carbon market finally kicked off its first compliance period, obliging more than 2,000 power generators to surrender allowances to account for their 2019–2020 emissions. The price of national carbon emission allowances (CEA) has soared from 48 RMB/t to a maximum of 61 RMB/t, and the price has fluctuated between 58-60 RMB/t since recently, up 20% from the beginning of the launch of trading. The CEA price stood at 58.24 RMB/t on 15 July 2022. As of that date, the market value of China’s national ETS has reached RMB 8.5 billion, with nearly 194 million tonnes of CEA transacted.

According to the results of Refinitiv’s 2022 survey, the largest challenges for China’s national ETS are the data quality and MRV (Monitoring, Reporting and Verification) issues. Nearly half the Refinitiv 2022 survey mentioned MRV and technical issues as the most urgent problem in the national ETS, specifying absence of information. This could be highly related to existing ETS policies are still mostly in “draft” or “trial” stage or marked “for consultation purposes., which could not set high penalties on data frauds.

China’s eight regional pilot ETS are still operational, running in parallel to the national ETS. Large emitters in sectors other than power generation (which is so far the only sector covered by the national market). Guangdong pilot and Beijing pilot’s captive power plants have shifted to the national ETS under the key compliance entities.

In 2021, we witnessed decreased trading volume of 8 pilots in total, compared to 2020, while carbon allowance price jumped to a higher level. A total of 0.64 billion tonnes of allowances were traded in the pilots (36% of the national carbon market in 2021), with a total market value of 2.2 billion tonnes, an average price of 34 RMB/t, or about 4.5 €/t.